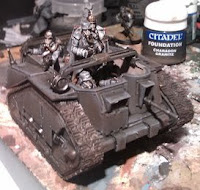 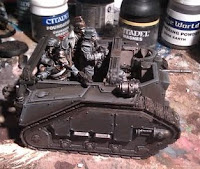 It's been a long summer, I have really enjoyed it! But I've been a terrible nurd. Not as much WH as I hoped and not a single post on the blogg.
Nop the autumn is here and I will paint more and definitely play more battles.

I picked up the trail where I left it before the summer. The centaur!
It feels like a ten year project but I've been giving it all my love since early this spring.
That's what I don't like about painting tanks, its a never ending story.

My valkyrie is a perfect exampel, painted twice and I'm not pleased with the colour scheme so I will repaint it at least one more time.

Don't forget my side project, necromunda. I've glued six minis and I received my new bases a couple of days ago.
I think I bought them from dragonforge.com.
Upplagd av johan kl. 22:49

Email ThisBlogThis!Share to TwitterShare to FacebookShare to Pinterest
Etiketter: death korps of krieg