The Karnakus system has not been to any vital importance to the Imperium. Karnakus Secundus has been the largest contribution to mankind providing the everneeding forces of the Imperial Guard with fuel and rawmaterials for its meny warmachines, but it´s one of meny planets in its sector with that purpose. Karnakus Tertius hosts a fortress of the Adeptus Mechanicus, but the fortress only purpose is examinating some odd findings of the old eras of man. No results has been made examinating these findings in the, almost, 900 years the Adeptus Mechanicus has been present.

Karnakus Sextus hosts a resarch station with a purpose long forgotten to the Administratum.

Almost 2 Terran years from now, that changed and the Karnakus system is now the top one priority in the entire sub-sector.

A drilling team working deep below the Karnakus capital Millas made a extraordinary discovery. As they drilled for minerals the tunnel suddenly collapsed and a huge caveroom filled of unknowned tecnology unshackled before them. 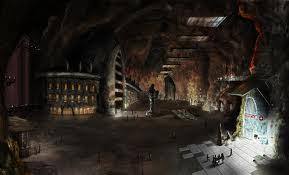 Before contact was lost with the Inquisitor he was able to send a message. It informed his superiors that the discovery, according to what he had overheard from the Techpriest, was an almost complete STC of a Knight class Drednought.

The Inquisitors message had more dire news. Both the Techpriests and the Adeptus Astartes was tainted and corrupted by the powers of Chaos.

As the news of the situation on Karnakus Secundus was unfold the Imperiums response was direct. The experienced General von Herth vas appointed Lord Commander and an army of impressive force was assembled from the entire sector. An Exterminatus of the planet was out of question. The army, named the Imperial Guard 981st (Karnakus) army, was to liberate the planet and claim the STC. 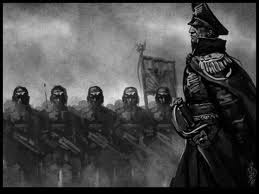 To amass an army takes time and resources and during this time the Chaos forces was able to streghten its forces. The labourers were all enslaved or tainted to serve in the chaos lines and the sorcerers of Chaos was also able to open up a gateway for more chaos warriors to reach Karnakus.

Due to the climatic phenomenas and topography of the planet the 981st army was forced to choose landing zones far from their goal, the town of Millas.

Due to the strenght of the invading armada the landing operation could be made without any resistance. Supplies were bringed down to the surface, the army could not rely on orbital support ones they advanced from the bridgehead.

At first the Imperial advance went without major problems. Some minor battles around straegical important settlements where won. The Chaos forces were forced to withdraw and due to the need of haste they were unable to sabotage most of the supplies the Imperial army conquered in their advance.

The 981st army advanced fourther inland. Here the land where more hostile and due to the lacking of watersupplies the army was forced to a streched advance. The Chaos started to harass the widespread imperial lines. Many brave Guardsmen were killed in enemy ambushes and even more lifes were lost to the hostile envirement.

About 600miles from Milles the Chaos forces had put up a strong defence line. A major battle was fought and the Imperial advance was forced to a halt by the enemy.

Supplies, above all watersupplies, was beginning to be a delicate issue to the imperial forces and the army was forced to concentrate to secure water sources instead of advanceing. The war was forced to a standstill.

Allmost a year have past with minor battles along the line without any breakthroughs from either side.