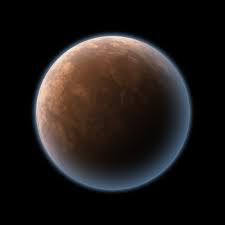 Orbit: Mean orbital distance is 142 million kms from the star.

Seas: 59% of the planet´s surface is covered by highly toxic seas. A widespread net of rigs extracts promethium from the bottom of the seas.

Mountains/highlands: Old eroded mountains covers large areas of the planet. The rock has a high amount of minerals and large parts of the landscape is mined for resources.

These phenomenas together with the topography of Karnakus makes orbital landing difficult in most sectors of the planet.

Society: Administratum standard. Large labour corps. The atmosphereic composition and the dangerous labour in the mines has made the workers estemated life length about 37,2 years.

Water supply: All surface water of Karnakus is highly toxic. Water has to be extracted from deep within the planet where time and earth have filtrated for hundred of years.

Food supply: All food is supplied from off world. Huge reserves are kept.

Urbanisation: Large urban areas is formed around mining complexes. A typical 3 stairs high Karnakus building is another 30 stairs below ground.

Smaller outposts is commonly found were large amount off fresh water can be extracted. Large water pipelines from these outposts are supporting citys that lacks its own water suppies.

Known history: Karnakus Secundus was inhabited by the Departemento monitorium in M38. Some evidence speaks that Karnakus have been inhabited before. Possibly during the great crusade . But with the lacking of food supplies after the Horrus heracy its inhabitants is belived to have abbandoned the planet or periched on it.