Downside Of The Shiny Coin 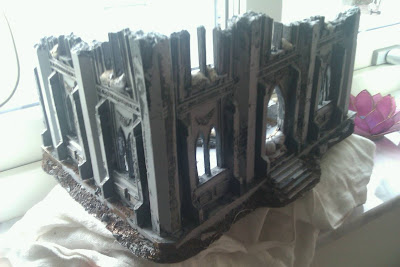 Almost all my post on this page is about how much I love Forge World. I believe it's time for some criticism since not everything is perfect.
I've always been impressed with the quality of the details on FWs minis and how they handle problems if you call there support. I don't think there's another company in the world that handles reclamations better. But (there's always a but) I don't think there's a company in the world with so much reclamations either.
My guess is that I've ordered from Forge approximately 20 times and maybe 18 of these orders have been problems with. Sometimes it just wrong stuff in the bags but most of the times it's just broken minis or parts.
Two years ago I bought some ruins from FW.
I've washed them and painted them (Kristian helped me with the painting).
Now the paint is falling of on one of them!
That's very irritating!!!

Three maybe four years ago I visited my local Games Workshop store. I found my self in a conversation with a guy named Victor. He was at the time painting his Gargantuan Squiggoth and told me that before he started painting stuff from Forge he always put them in the sun for a couple of hours then wash the bits. After gluing the pieces together he sprayed them with a gloss before he undercoated them.
At the time I thought "what a nurd", now I know better. At least on big resin minis it's a must do if you don't like to paint everything twice.

So after removing as much paint as a could with T-röd I placed the house in the sun and washed it after that with T-röd again. Now it's sprayed with gloss and soon it will he black again.
Published with Blogger-droid v1.7.4
Upplagd av johan kl. 16:10