Yesterday I and Johan faced each other in a massive brawl in Lokan.
After some influence from my opponent i decided to go full throttle head on and try to wipe him clean of the table, ramming in with all of my flame thrower equipped chimeras. This brave and bold offense came to a quick halt as they where stopped by one guardsman on crack armed with a melta gun and massive heavy bolter fire from afar. The surviving cadians managed to prevail against the better trained and better armed death korps in close quarters. My sentinels did their job in my first turn by destroying Johans only armoured vehicle with ease. For the rest of the game they would be just an annoying unit to use. Killing a maximum of 2 guardsmen with their lascannons. My Leman russ demolisher who where sent to guard my flank didn´t do it´s part. Firing 3 shells compleatly of their target i realised that it must have been crewed by monkeys. They have now been replaced with other, better trained monkeys. Even though my flank paved way for Johans death ponies my hydra managed to keep them at bay with accurate autocannon fire. At the end Johan grabbed one objective and i was one turn away from reaching another. But not close enough. So don´t underestimate the never ending horde of death korps and deffinetely not the thud gun, who scored maximum damage every turn! (aswell as Johans mighty influence) 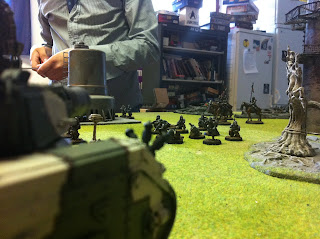 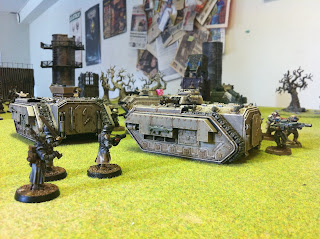 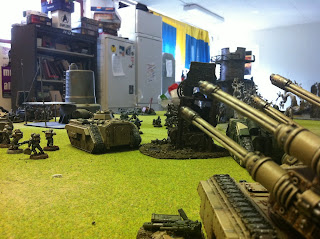