I love the smell of burned greenskin in the evening!

First up on the barbecue were Nicklas armored horde of various ork machines. Or as i call it, "the moving junkpile of doom".

My chimeras quickly moved in and turned the tiny tanks into molten slag like marshmallows. This trigerd the bloodthirsty orks in a nearby assault boat on wheels to try and avenge their fallen tank mates. Storming out from their scrapheap they fired away in typical orkish maner followed up by a raging charge slamming in to my imperial armor. This brave attempt proved futile as they where quickly turned into ash when the chimera turned and "turned up the heat". The tank is now known as
"The grillmaster". Meanwhile on the opposite side of the battlefield my brave sentinel squadron fired away on the biggest pile of junk on the table. After several volleys of lascanon fire i began to suspect they were crewed by orks, aiming as if they had something ramed up their asses. Speaking of wich, it´s exactly what they got when the über walking garbage closed in and had his way with them. Luckily there were no children present. Some extraordinary shooting from the ork cans, forced my veterans to disembark in to the woods and where then taken care off in ork terms. But they didn´t die in vein as "The grillmaster" showed up to do his thing with the remaning walker.
An enjoyable game where the orks just couldn´t take the "heat" =). (or that the senario really suited my army)

Next up where Christians bikers or the orks own hells angels gang if you like.

I had the first turn and started with turning his tank into a crater and forcing an ork squad to take a walk instead of the bus. A great start wich would turn into a disaster! The motorcycle club grabbed their leather, shades, bats and moved in looking to cause some trouble for the establishment. And so they did. A LOT! In a single turn there where tankwrecks and screaming guardsmen piling up starting to look like the shortest game yet. A typical "det händer ju inte!" moment. From the caos the remaning humans where able to put up their last stand and blazed away with everything they got. But the bikers leather proved to strong for hi-tech melta and plasma fire. "The grillmaster" wich had been damaged finally got his shit together and looked for a suitable meal to cook. He didn´t have to look for long as the orks where literally everywhere, and luckily for me, the stood nicely packed, just waiting to fry. "The grillmaster" aimed and shouted; "NEJ NU JÄVLAR!" or as human torch would have said; "Flame on!". When the smoke from the incarnated orks had lifted the remaning guardsmen managed to sweep away the stragglers.
A really close game wich could easely have been in the bikers favor. But still, a great triumph for the emperor!

Her is some pics from my and Nicklas battle. Forgot to document the game with Christian. Might had something to do with the golden beverage. 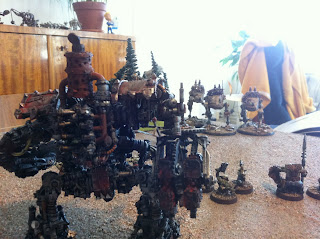 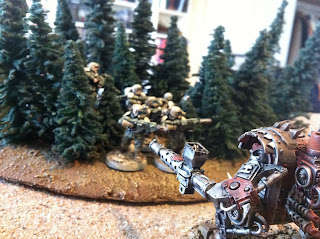 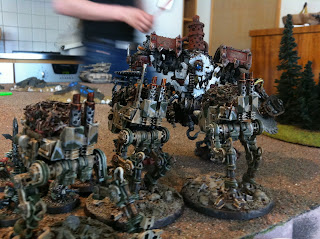