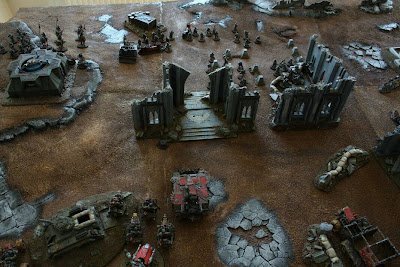 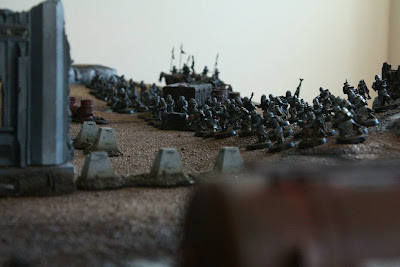 Another battle has been played between humans and greenskins.
I found a new scenario on internet called Stop Da Brakeout. Mission was for me (Death Korps) to move all my troops of the board on the opposite side. 2points if I succeeded and 1point if the unit was still alive and not fleeing. The ork player get 2point for every destoyed human unit.
The orks starded with two units and a HQ but had the possibility to make the reserve roll turn one, this was a life saver for me. Kristians reserve roll was all in my favor, he did not get his complete army on the board until turn three.

Another gamebreaker, two deathriders and four men strong infantry command squad killed Wazdakka and two bike colleagues (Wazdakka had only one wound left). This was not on the charge!

The humans controlled most of the battle but with only two units leaving the board (two were units close, but not close enough). Kristian played smart and brought home a draw.

This was a super fun battle, just send me a message and I can e-mail you the rules.