Hello there!
Today we gatherd at Nicklas place for some warhammer goodness.
I spent most of my time painting. (feels good to start painting one week befor the deadline...)
But I also played a great game against Gurras Ultramarines.
What seemed like a impossible task for me at the beginning slowly turned more and more to my favour.
The possibly heretic Ultramarines, must have had their bolters loaded with paintballs or something... After two turns of fiers shooting (and me rolling power armour saves like if i was wearing nothing but underpants...) I finely got to charge with my four pissed off tactical marines.
They beggan to eat away at one of Gurras tactical squads.
During all this time my dread hade... well he hadent done anything realy i guess... till he finally got to charge in turn three and killed a unit of scouts out right.
Crazed by the heat of battle he continued to rip apart a predator tank. Finely he got a chance to avenge his fallen Iron Father by firing his massive plasma cannon, killing six marines in one shot! Then he charged and killed the last four. Venerable deeds.

After the gruewsome battle, the heroic leaders were presented with a great feast !
Awsome day:) 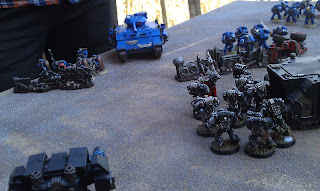 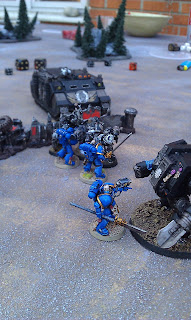 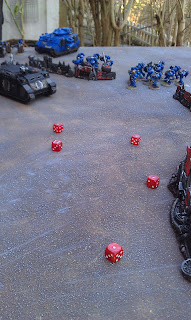 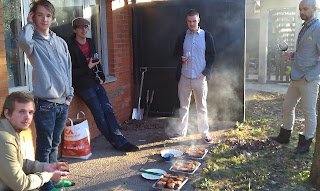 Email ThisBlogThis!Share to TwitterShare to FacebookShare to Pinterest
Etiketter: Battle Report, Campaign, Iron Hands, The Green In The Warp