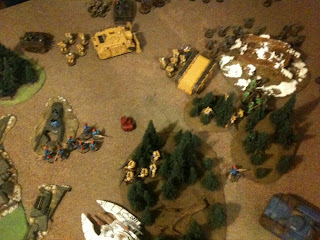 Very light, yes, but after four and a half hours and still only at turn four, I think we were all pretty exhausted. The set up was two thousand points per side, with Kristian's Imperial Fists and my Eldar facing off against the verminous tides of Chaos (actually Johan's Death Korps and Anders Cadians).
The mission was All Round Attack, with the Eldar and Marines valiantly defending a small oil dump in the middle of the table. The battle was very closely fought, but finally ended in a draw, with no-one close enough to the objective to be able to claim or contest it.
Upplagd av Sebastian kl. 11:16