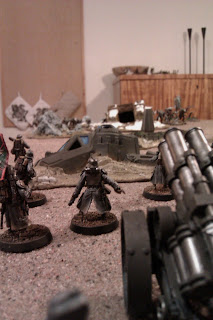 Yesterday the naughty snails also called Tyranids tried to invade medborgarplatsen. I don't call tham snails due to there speed, more because of there disgusting sickly skin. The human race can thank me and Kristian, without us you would not be able to wake up to day and have the wonderful contingency to live another day. We are the defenders of the world. 750p of Death Korps and 750p Imperial Fists against 1500 tyranids.
It was a damn good fight, a real tight game with no sure winner. Unfortunately the clock was ticking and the time ran out of controle.No one knows how realy won, except all you how still breath. Are you human? Then you know.

Not all troopers had a good day. The squad is executed but as a true Death Korps he stod firm and looked the winged warriors in there eyes.
For the Emperor
Upplagd av johan kl. 20:48