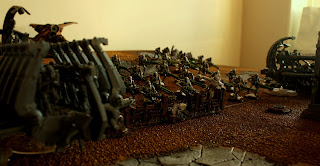 Let me tell you a story about a boy. A boy who has waited for a long, long time for the one true love. Necrons.
Once the Necrons was a race of metallic automata enslaved to mighty gods of lovecraftian horror. The gods wanted to harvest the galaxy of life energy to quench their insatiable hunger, using their slaves to farm its inhabitants. Not much unlike a certain bug/dinosaur intergalactic hive race.Now the story goes a bit different. The former slaves decided their gods were a bit bothersome so with grim determination the Necrons turned upon the star gods with all their might and shattered the C'tans physical forms. A 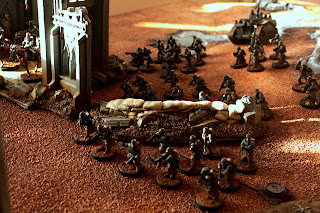 fter the battle the Necrons were weak, easy for the ravages of the Eldar and younger races. So to sleep they went, into stasis tombs across their cyclopean realm, leaving the lesser races to their petty wars.And now the Necrons are waking up throughout the galaxy, hell bent to reconquer th
eir once mighty empire. 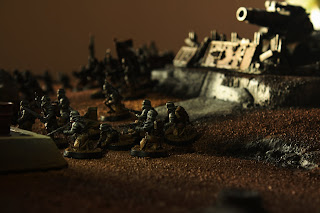 It ended with he getting 9 KP and me getting 26, a victory beyond mesure. At least on paper. The board was fairly reduced with models. I had had only eleven Warriors in various units, a Ghost Ark, a scarab swarm and a wraith left. Johan had almost as much. I just finished more units than he, so victory. My saving grace was two turns of Night Fight, thank you Solar Pulse! But, it was a fun fight, even until the end.

And so begins a new chapter in the epic saga that is the Necron Army.

Until Next Time Meatbags!