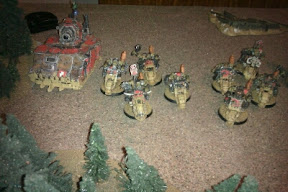 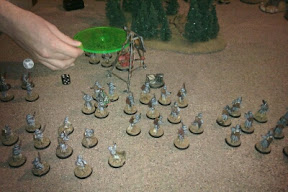 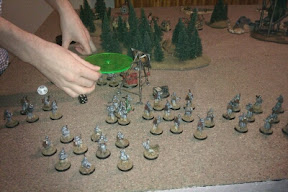 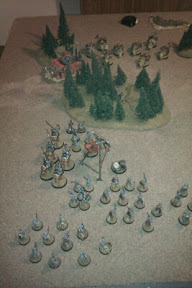 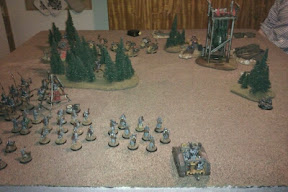 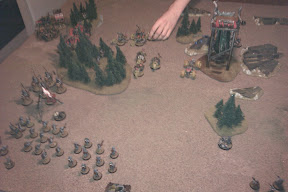 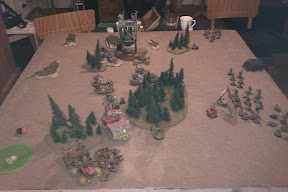 First battle done at the new points. We are now at 700 pts and that raise was sorely needed.
A type of pitched battle against Johan was played, Trench Warfare from the Battle Mission book. I deployed my troops first and he started playing... the bastard.
This was by far the best fight in the campaign to date, lots of twists and turns. We made lots of mistakes, both of us. Johan made obvious rookie mistakes that one shouldn't be doing at his gaming level, but stress takes even the best of us down. My mistakes was easy to hide and I don't think he noticed either of them. Fortunately nothing was game breaking except forgetting how fast my bikers really are, Wazdakka is a monster!
But even monsters die before the martial prowess of the Death Korps.
The best thing about the fight was that the dice did not decide, both rolled average, and skill won the day. A narrow win it was, Johan held three objectives and I held two. A tank shock later, two of his objectives contested and victory was mine. Glorious!

One interesting fluffy tidbit was that Johan's reserves was exactly the points raise. Fun from a narrative point of view and we're all fluff whores at heart...


Until Next Time Children!

Ps. Have you all sent in your lists yet? You have until Sunday, come Monday and you'll lose one piece of land for every day you delay. Harsh, but fair...

Email ThisBlogThis!Share to TwitterShare to FacebookShare to Pinterest
Etiketter: Campaign, death korps of krieg, Orks, The Green In The Warp