Today I sat down with brush in hand in order to make my destroyers ready for a fight tomorrow. But, an urge stopped me. The urge to paint some yellow marines!
Thankfully, it had been decided that the dead astartes on the Tomb Stalker base should be Fists, so the urge was fulfilled without having to do something non-Necron. Beautiful.
So now I can go on and finish those destroyers... stupidity since they won't be a part of my starting force for our campaign, but that haven't stopped me before so why now? 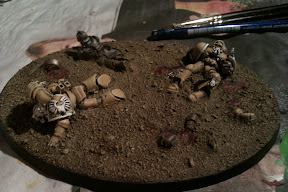